In honor of E.G. Hamilton passing, we wanted to post this article written by Tipton Housewright that was published in AIA Dallas Columns Magazine in 2014.

Earle Grady Hamilton, FAIA, is one of the first architects that I ever met. I met him when I was a teenager, even before I had decided to study architecture. In hindsight, I can say that meeting EG (as he is affectionately known by his many friends) and experiencing his buildings had a direct and lasting impact on me and my choice of architecture as a career. Naturally, I was very pleased to learn that EG Hamilton, FAIA, is the 2013 recipient of AIA Dallas’ Lifetime Achievement Award.

Few architects accomplish what EG has accomplished over the course of his almost 70-year career. EG is not only known for the extraordinary quality of his design work, but also for his many contributions to the profession and to our public realm. I had the pleasure of working with him in the 1970s and 1980s and was very fortunate to observe first-hand his artistic convictions and his dedication to architecture. A few weeks ago, EG and I went to lunch at his favorite spot, Al Biernat’s, and he shared many memories and stories of his career with me.

EG studied architecture at Washington University in St. Louis, graduating in 1943. It was an exciting period to study architecture as the grip of the Beaux Arts school was loosening and modern architecture was being embraced throughout the United States?despite the fact that there were only eight schools of architecture at the time. In the early 1950s, following service in the U.S. Navy, EG worked in Detroit for Minoru Yamasaki, the designer of the World Trade Center towers. During his years with Yamasaki, his colleagues included John Dinkeloo, George Hellmuth, and Gyo Obata, all of whom would become notable architects and household names. EG says of Dinkeloo that he was the most talented technical architect he has ever known. More than 60 years later, EG speaks with deep respect and admiration for Yamasaki and with great fondness for the years spent working with and learning from him.

In 1952, EG moved to Dallas to work with Arch Swank; soon after that he started his solo practice,  designing a number of houses for Lloyd Smoot, a local realtor. These houses showed EG’s great ability to shape form and space in an understated and elegant way. One of them became a Better Homes and Gardens 5-Star House and a TSA Design Award winner, and many awards were to follow. As fate would have it, Mr. McHinney, the owner of the award-winning house, was an executive with Grand Prairie-based Temco, and this relationship led EG to his first major commission, designing the engineering center and executive offices for Temco. The Temco project led to a partnership with George Harrell, FAIA, and the firm of Harrell + Hamilton Architects was founded in 1956.

For the Temco headquarters project in Garland, EG and George used folded plate concrete technology, lending a modern and progressive image to the corporation that would eventually become Raytheon.  With EG’s design leadership, the firm went on to win other major design commissions. The Republic Bank Tower, for instance, was the tallest building west of the Mississippi when completed in 1965. EG also designed the first phases of the Dallas Convention Center and, perhaps equally importantly, persuaded the city to acquire the land necessary to continue to expand the center to its present size. In the 1970s, EG designed the United States Mission in Geneva, Switzerland, a facility that housed U.S. State Department diplomats engaged in nuclear weapons negotiations with the USSR. During this same period, EG designed the Citizens Bank Building in Richardson, which was featured at an exhibit at New York City’s Museum of Modern Art (MOMA) for the architectural expression of its column-free floorplates and its bold precast beams. Thomas Taylor of Datum Engineers?a frequent collaborator with EG and himself another living legend in Dallas?was the structural engineer on the project.

Discussing architecture with EG inevitably led to NorthPark Center in Dallas and its many stories.  Perhaps EG’s favorite project, and certainly the most iconic shopping mall in the Southwest, NorthPark was designed in 1963 and completed in 1965. EG imparted an elegance and timelessness to the center that lasts to this day; it stands as a paradigm not only of retail architecture but also of great design and great public spaces. He told me of his desire to experience the center as a series of rooms filled with natural light, and he personally supervised the development of the mix for the creamy white brick that is used throughout the facility. For almost 50 years, EG’s NorthPark has been enjoyed by millions of people while serving as an understated backdrop for a collection of internationally renowned pieces of modern art and sculpture.

In 1970, EG led the transition of Harrell + Hamilton into OMNIPLAN. Launching a new brand and a new multi-disciplinary business model, EG laid a foundation for the firm which allowed it to not only survive during the hard times but to prosper into the future. The firm logo, designed by Tomoko Miho of New York, won many awards and was also exhibited at the MOMA.

The same talent and vision that EG used in architecture also came into play when he spearheaded civic affairs. As head of the arts component of Mayor J. Erik Jonsson’s Goals for Dallas program, his leadership was critical to the development of the concept of the Dallas Arts District. For that assignment, EG worked directly with the offices of Sasaki and Carr Lynch of Boston to develop early plans for the district. Through this work, the group identified potential sites for the creation of the arts district, including areas in Oak Lawn and Fair Park. However, EG and George Harrell?with the support of Dallas city manager George Shrader?recommended that the arts district be created in the area where it stands today, which in turn brought the Dallas Museum of Art to its current location.

EG’s professional contributions and recognitions are almost too numerous to count. He served as AIA Dallas’ president in 1964, was appointed by Gov. John Connally to serve as president of the Texas Board of Architectural Examiners  in 1967, was named a Fellow in the American Institute of Architects in 1968, and served as president of the National Council of Architectural Registration Boards (NCARB) in 1974. In 2000, EG received TSA’s Pitts Award for Lifetime Achievement. That same year, OMNIPLAN was awarded TSA’s Firm Award, due in large part to EG’s lasting impact on his former firm. In addition to these remarkable achievements, three of EG’s designs have been awarded the AIA Dallas 25-Year Award: the Hexter residence, Republic Bank, and NorthPark Center.

Now approaching 94 years of age, EG is, like his architecture, timeless. His passion and commitment are unwavering and undiminished. In an age of constantly changing values and ideologies, it is extraordinarily reassuring to spend time with EG and listen to a man who knows what is important?and who has never let go of it. 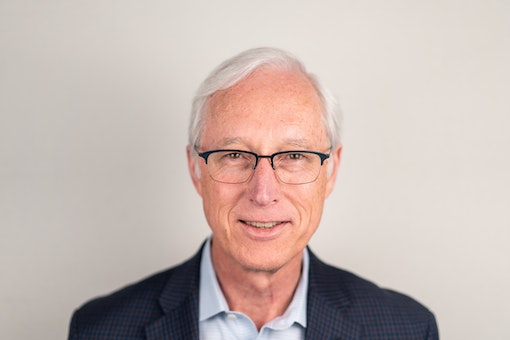 Enter your email address to receive the latest news delivered right to your inbox.